The city of Tirana, Albania, hosted in October 13, 2018, the 1st Transnational Networking Workshop of the INNOVAGRO project. The workshop was organized by the Union of Chambers of Commerce and Industry of Albania, moderated by the E-institute, Institute for Comprehensive Development Solutions, Slovenia, and attended by 23 persons including representatives of the project partners and external experts. 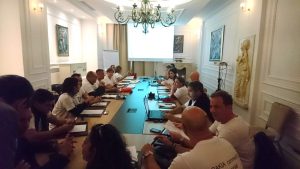 The prime aim of this event was to prepare the roadmap for the implementation of the next 6 networking events of the project. To this end, the workshop was split in two sessions.

The first session took the form of a plenary session during which a discussion and exchange of views took place between the project partners and external experts with respect to the clusters in the agro-food sector, and the factors that contribute to their success or failure. The main conclusions from this discussion were the following: Cluster is understood as a geographic concentration of different stakeholders operating in a competitive and at the same time collaborative environment and has common co-evolution. Difference between success or failure of clusters lies in the relations between vision, membership, leadership and networking. Cooperatives were pointed out to be one of the best forms of clustering. Usually producers themselves are not capable of organizing themselves, therefore networking institutions are necessary to do the first step and to organize and run the clusters. Challenge is also how to preserve the ancient knowledge in agriculture and to give the farmers opportunity to tell about their work, to educate them and to include ICT and research. Main cooperation weaknesses are problem of common vision, weak communication, lack of knowledge and weak trust between stakeholders. The most important success factors are using of new technologies and ICT, improvement of skills and leadership, as well as stronger international cooperation. Opportunities are in expanding markets, awareness of high quality products and development of strong supply chains. 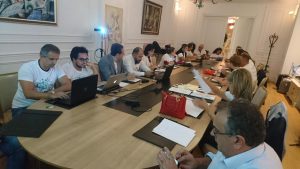 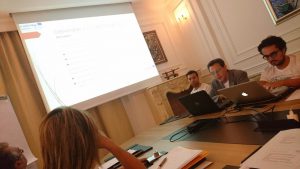 The first, plenary session of the workshop was followed by a second one, which took the form of a brainstorming event so that project partners and external experts could provide in an unbiased way their individual views on topics such as the weaknesses of cooperation, the success factors of and opportunities to agro-food sector cooperation, as well as topics to be addressed in future networking events.

Cooperation opportunities will be discussed in more detail during the 2nd INNOVAGRO Transnational Networking Workshop, and good practices will be presented to the participants.